From Ruth’s last game, in Hazelton, PA, it was a short train ride to the next stop on the 1923 Pennsylvania barnstorming tour, or as I like to call it “The Road to Dutch”. On 10/25/23, multiple newspaper sources reveal that Ruth was in Scranton, PA getting mobbed by a crowd of young boys. In this day and age, they’ll lock you up for something like that, but in 1923, it just meant you were really famous.

I’m sorry that article is so small, and hard to read. In summary, it says that Ruth, and his All-Star squad,, beat a team made up of Scranton’s best by the score of 2-1. After the game, Ruth was leaving Brooks Athletic Field when he was mobbed by a crowd of more than 6,000 children. The police had to escort him out, as he waved and apologized to the excited mob.

Here’s another article about the same incident, only this time from the NY Times. I’d like to thank Sean, of Condition: Poor for emailing this one to me yesterday.

I also found this, much less exciting, but no less significant article in the Toledo, Ohio News Bee. 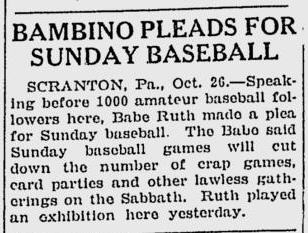 So we now know that Ruth played an exhibition game in Scranton on 10/25/23. To date, this is the only solid information I have found on that particular game, but it appears to be VERY solid. We also know that Ruth was still in Scranton on the 26th, where he gave a quick speech promoting Sunday baseball.

After his appearance in Scranton, I lost track of Ruth for a little while. The rest of the World Series All-Stars went on to play a game or two without him. You’ll find out where they played in the next post, and you’ll also find out where it looks like the Bambino was as well, as he works his way across the state of PA, towards his speculated meeting with my wife’s great-grandfather, Dutch Schneider.

This entry was posted in Uncategorized. Bookmark the permalink.